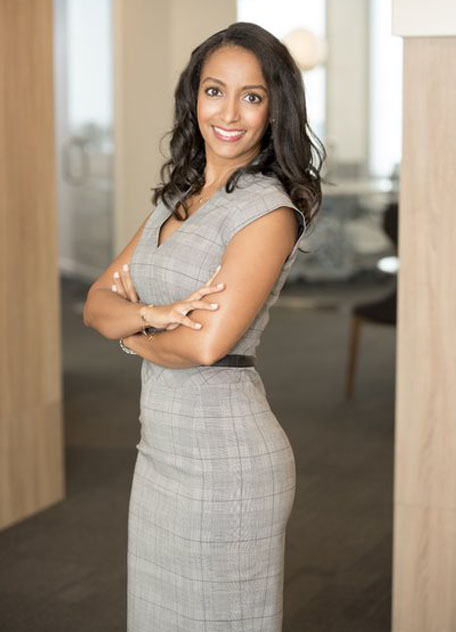 Arlene Herrera is an Associate in the Intellectual Property Practice of MINIÑO and is the firm’s Coordinator for IP matters in the Caribbean.

Her practice is focused on all aspects of trademark law, in particular, in the management of trademark portfolios for the whole of the Caribbean. Based on her solid relationship with MINIÑO´s web of associate firms throughout the Caribbean, and her own significant experience and expertise, she assists clients in the clearance, registration and enforcement of their trademarks throughout the region. Arlene is part of the MINIÑO team that offers its clients a one-stop-shop for Intellectual Property matters in the Caribbean.

Arlene has “grown up” at MINIÑO. She first joined the firm in 2004 as a student trainee. In 2006, after graduating with her law degree from Pontificia Universidad Catolica Madre y Maestra (PUCMM), she joined the IP Department of MINIÑO as an Associate. In 2007 she took a sabbatical from the firm to travel to Spain and obtain her LL.M. in Intellectual Property law at the University of Alicante. Arlene stayed in Spain after graduation to work for an IP Boutique in Alicante, where she acquired experience in European trademark law and practice as well as in European business and service standards. After a further 6 months studying French in Brussels, Arlene returned to MINIÑO in 2010 as an Associate.

Arlene is ranked as a leading professional in the management of international trademark portfolios by Chambers and Partners Latin America and WTR 1000.

“Ochoa and Blanco are flanked by stars of the future Arlene Herrera and Pamela Hernandez, who have proved to be unstinting in their dedication to clients. Regional trademark portfolio management is Herrera’s strong suit.” WTR 1000 2018.

“Associate Arlene Herrera focuses her practice on the co-ordination of trade marks, patents and domain portfolios in the Caribbean. According to interviewees, “she is very responsive and really understands our business.” Chambers and Partners, 2017

“Associate Arlene Herrera is “very diligent and knowledgeable,” according to interviewees, one of whom adds that “she has gone above and beyond for us on numerous occasions. “Herrera focuses her practice on the management of trade mark portfolios throughout the region.” -Chambers and Partners, 2017

“Arlene Herrera makes her debut in the guide for 2016; the rising star is the firm’s coordinator for trademark matters in the Caribbean – a role she excels at given her gift for motivating foreign associates.” -WTR1000, 2016